In this BeSafe test score overview you can find the consumer test results of the Plus Test and ADAC testing together with an easy overview of the differences between the tests and how to evaluate their results. 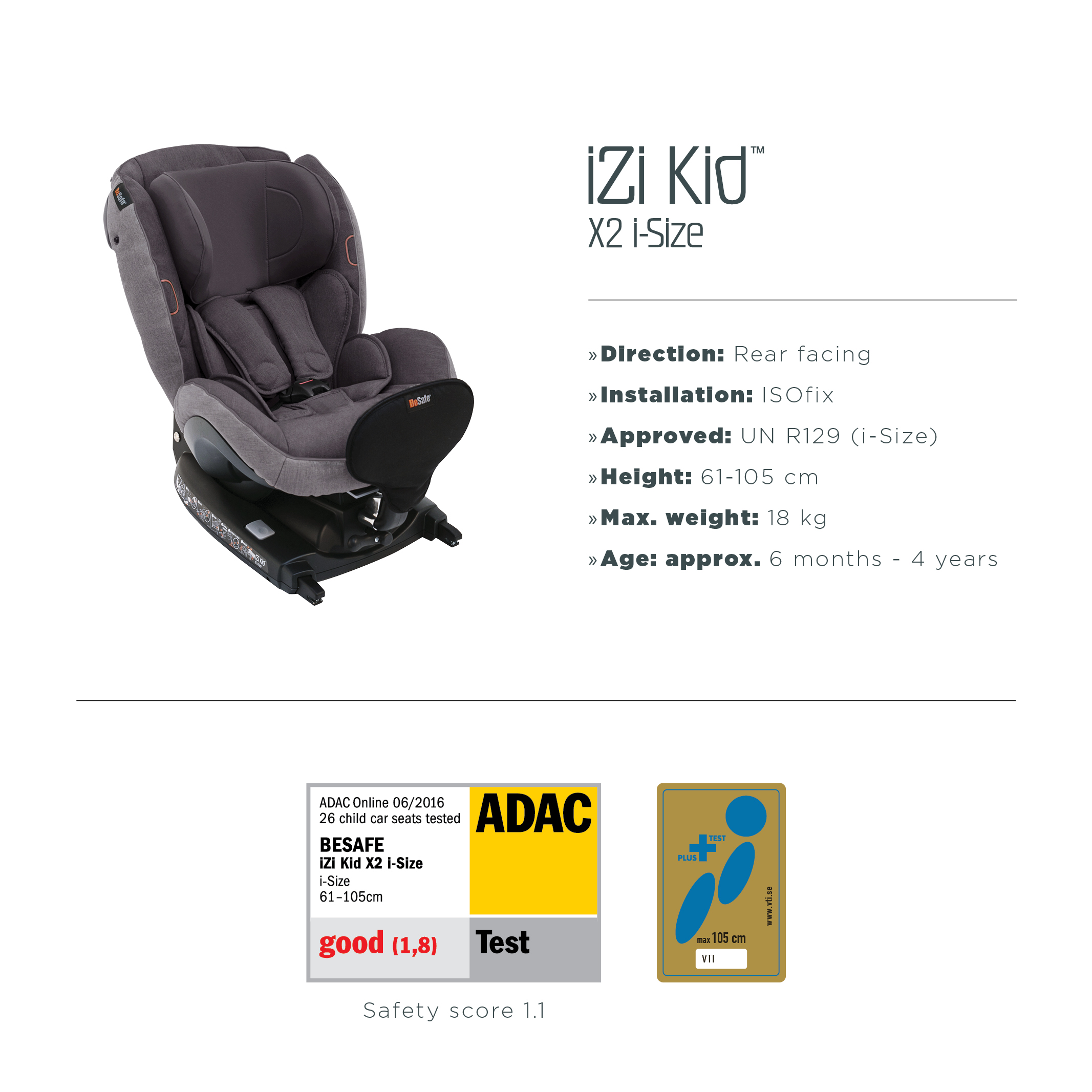 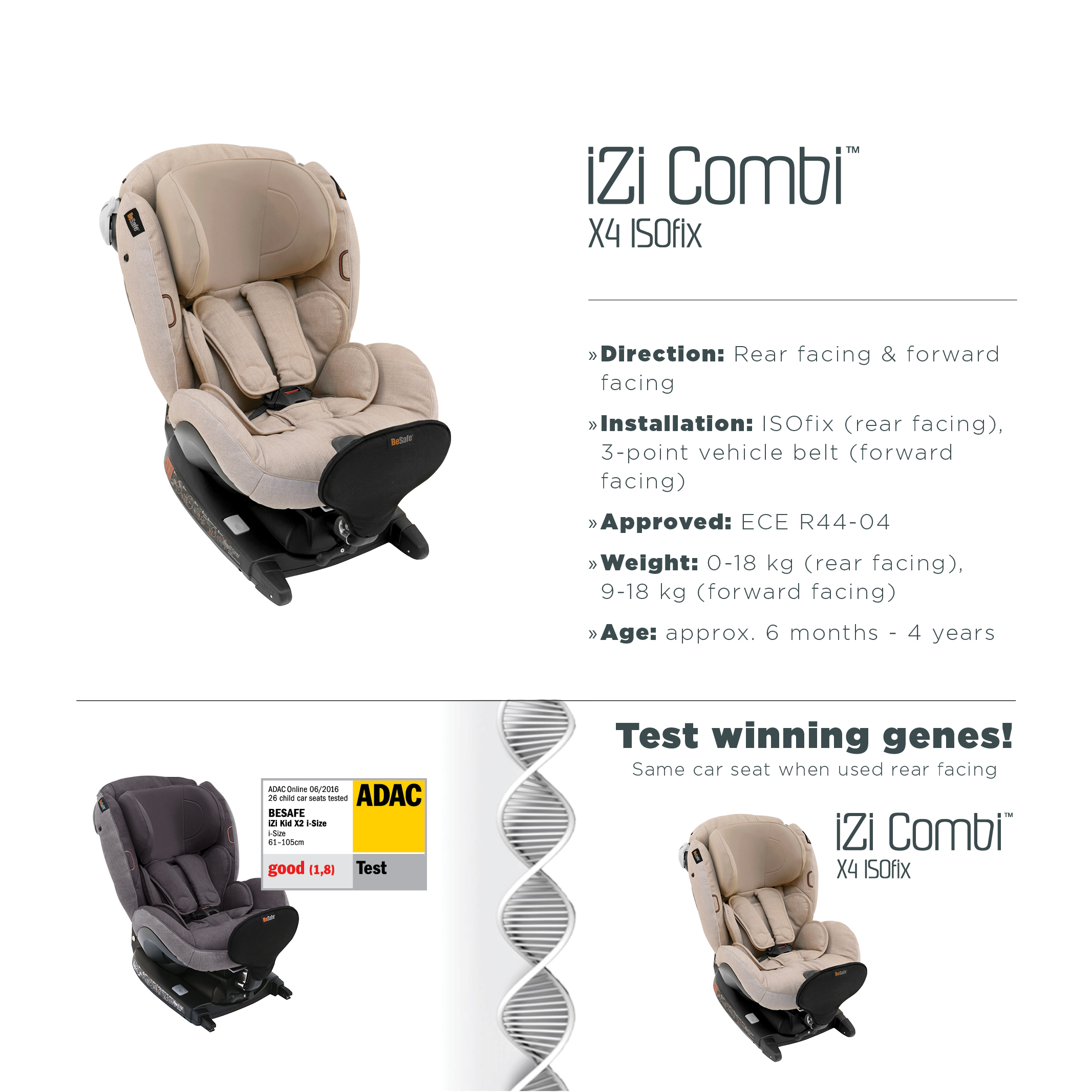 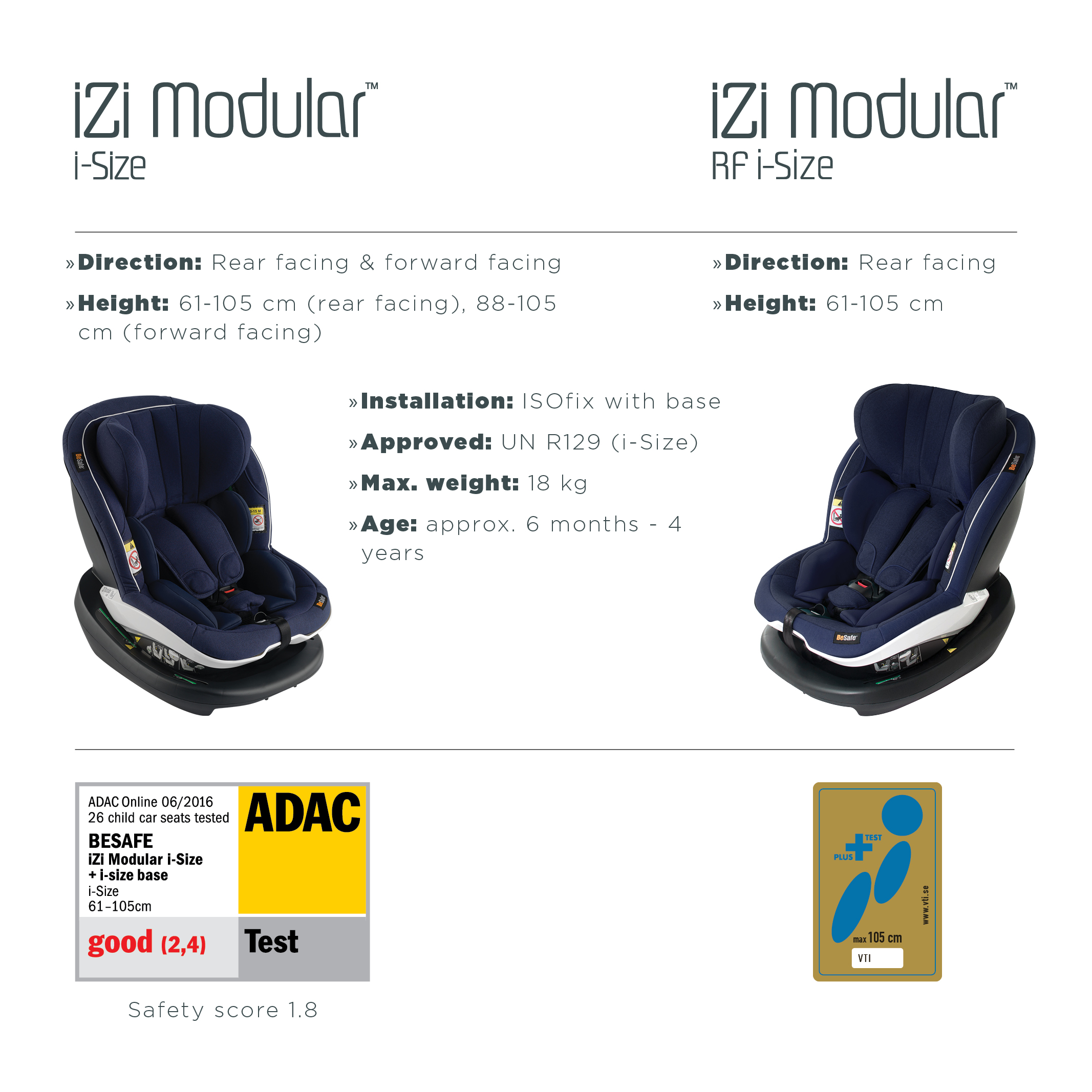 What are the differences between these two seats? Both seats are identical, except for the iZi Modular i-Size also featuring the option of installing it forward facing. The iZi Modular RF i-Size has been specifically designed for the Swedish market, where keeping your child forward facing below the age of four is not seen as an option, and the ‘RF-version’ can thus only be installed rear facing. Both seats also feature the additional side impact protection “SIP+”.

How did they perform in the ADAC test? The German institutes ADAC/Stiftung Warentest only tested the “combi-seat” iZi Modular i-Size, as this version is available on the German market. The Swedish-based RF-version has not been chosen by ADAC for testing as yet. The iZi Modular i-Size scored a really good safety result of 1.8, which is especially outstanding for combi-seats, as the forward facing crash test result also influences the final safety score. 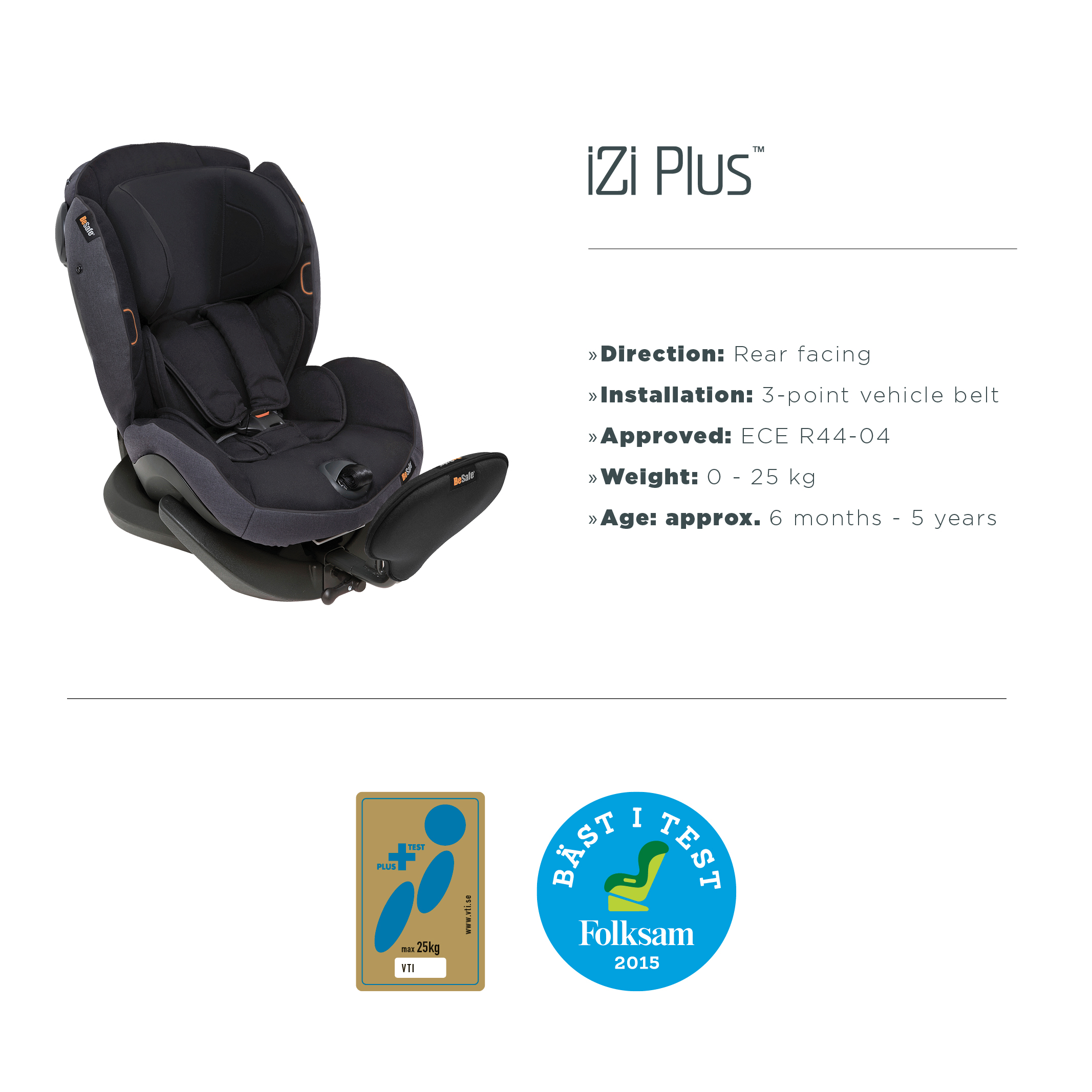 The iZi Plus has not been chosen for testing by ADAC/Stiftung Warentest since its launch in 2013. Yet, it is tested and approved by the Swedish Plus Test and is one of the most popular seats in the safety-focused Scandinavian markets. In 2015 and 2017, the iZi Plus was awarded “Best in Test” by one of the largest Swedish insurance companies ‘Folksam’. The improved side impact protection “SIP+” is available as an accessory for the iZi Plus to further improve its side impact performance.
Read more about the iZi Plus

Read more about the Folksam awards

What is the ADAC and how can I evaluate its test results?

Child car seat tests are conducted by International Consumer Research & Testing (ICRT) in conjunction with the ADAC, the German motoring organization. Crash tests at the ADAC are tougher than the tests seats are subject to in order to obtain type approval in Europe. Front collision and side collision are the most important elements of the tests. However, the seat’s construction is also a key factor. Since 2011, greater emphasis has been placed on child comfort. The sitting position and roominess of the seat are evaluated. An evaluation is also made of how much space the seat takes up in the car.

That is why it is important to remember the different evaluation criteria when looking at ADAC results. The safety score ‘only’ accounts for 50% of the final score, while handling aspects account for 40% and ergonomics for 10%. Aspects like ‘heavy seat’ or ‘limited view range for the child’ lead to reduction of a seat’s score. Chemical test results however have no influence on the final overall score unless they’re above a certain threshold.

The ADAC decides which seats are to be tested and purchases these directly from the German market. Manufacturers do not have an influence on whether their seats are being part of the tests or not. ADAC tests are conducted twice a year: in Spring and in Autumn. Typically, seats that were launched since the previous test are included in the latest test.
Read more about child car seat tests and the ADAC

What is the difference between ADAC and Stiftung Warentest?

Stiftung Warentest is the consumer council in Germany. It administers and conducts tests on behalf of the International Consumer Research and Testing organisation, ICRT. Stiftung Warentest conducts its own tests in collaboration with the ADAC.

What is the Plus Test and how can I evaluate its test results?

The Plus Test is conducted by the Swedish testing institute VTI and is a voluntary approval that car seat manufacturers may choose to test their car seats for. A child safety seat approved according to the Plus test has passed the toughest crash test available and gets an additional logo marking as evidence.

The Plus Test has such strict requirements that forward facing child car seats would not be able to comply with them. The thinking behind the test is that no children sitting in a child car seat which is Plus Test approved would sustain any serious/life-threatening injuries in a collision.
Read more about child car seat tests