Anita Jorstad is a 34 year old teacher. Anita experienced what we all try to avoid, she was involved in a serious road accident. Just before the accident Anita was recommended to use BeSafe Pregnant for better safety for her unborn baby.

Passed out in the driver’s seat

A few weeks after Anita had bought BeSafe pregnant she fainted whilst driving. Her car swerved into the oncoming traffic and collided with another car.

“I was 14 weeks pregnant when the accident happened. I remember a loud noise, everything was white and there was a burning smell. I was scared for my baby’s rather than myself. The car spun and stopped, I tried to open the car door several times with no luck, and finally a man came and pulled me out the car on the passenger side. I was lying on the pavement and had severe pain in the hip / pelvis and neck, but no pain in the abdomen area.”Anita told BeSafe.

Anita was taken to Ullevaal University Hospital in Oslo by air ambulance. At the hospital she received the good news she hoped for from the trauma team. Everything was OK and the doctors were very surprised but delighted to report the baby was not seriously injured. The BeSafe Pregnant had helped limit any injuries significantly.

Anita was discharged from the hospital the day after. Alexander was born on 25 April. 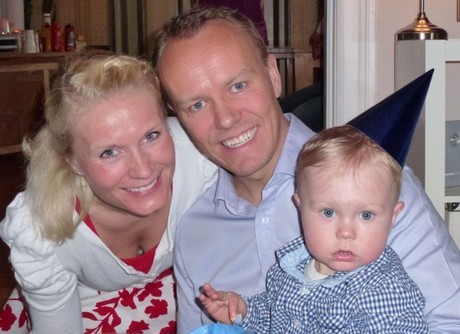